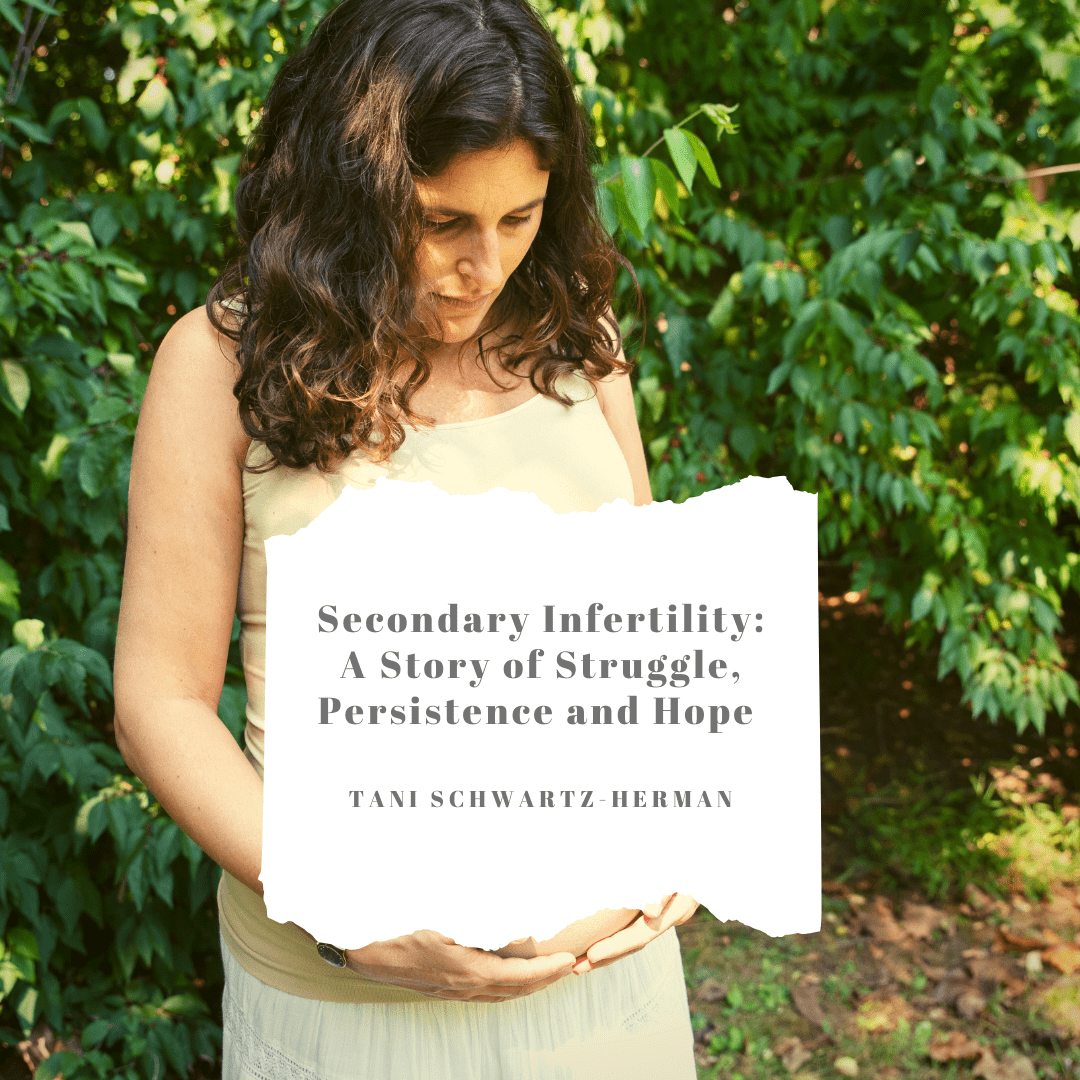 We struggled for nearly 5 years with secondary infertility.  Throughout our fertility treatments, one of the things that continuously inspired me were the articles I read about other women’s infertility journeys. Through these stories I found hope, a sense of connectedness, and affirmation.  Now that our journey has come to an end with the arrival of our long-awaited for baby boy, I feel that it’s time for me to share our story. It’s not an easy one for me to share – but I do so in an attempt to offer a glimpse of the hope that I found in other women’s brave stories, as well as to raise awareness around infertility and donor egg.

Our journey was one that consisted of six failed IVF cycles followed by five donor egg embryo transfers, including one that resulted in an ectopic pregnancy and one pregnancy that we terminated for medical reasons towards the end of the first trimester.

We got pregnant with our first son after a few months of trying so I didn’t expect any issues when we started trying for our second at the age of 36. However, after several months of trying on our own unsuccessfully, we decided to seek help. At our first consultation, the doctor did an ultrasound and told me that my ovaries looked small and I could go into menopause in my early 40s. My initial reaction was that he was being overly conservative and I didn’t take him seriously.

We then went to a different doctor and after they did my blood work, the doctor called me to let me know that the test results indicated that I had diminished ovarian reserve.  She recommended going straight to IVF without trying other less invasive forms of fertility treatment.

That’s when it hit us that we could be facing some serious challenges.  I was definitely overwhelmed and anxious, but still optimistic that we would be successful with IVF since I was 37 at the time. I had a few friends that had also gone through fertility treatment in their 20s and had gotten pregnant with their first round of IVF, so I was hopeful that it would work for us as well.

Unfortunately, because of my age and my diminished ovarian reserve, IVF proved unsuccessful for us. We went through a total of 6 rounds including a few that were cancelled because of poor response and some that went to retrieval but didn’t result in a successful pregnancy.

After about 3 and ½ years of trying to get pregnant, we made the difficult decision to move on to donor egg.  For years, throughout our struggle with infertility, I felt as though my body was failing me. In the world of infertility, I was relatively young when we started trying for our second – 36 – and I didn’t understand why it was so difficult for me to get pregnant.  In addition, there was a history in my family of women getting pregnant at an advanced maternal age – my mother at 37, my grandmother at 38, and my great grandmother at 41, which made it especially hard for me to face that I was unable to become pregnant.

At some point though, I realized there was nothing I could do other than accept our situation, and that if I wanted another child we needed to be open to different forms of treatment. So we decided to pursue donor egg.  It took us some time to warm up to the idea, but eventually we became more comfortable with it. I also started going to a support group with other women who were pursuing donor egg and I found this to be extremely helpful.

Donor egg has a very high success rate, so after years of struggling with infertility, our sense of hope was renewed.  However, our journey with donor egg was not meant to be so smooth.

The first two donor egg embryo transfers did not result in a pregnancy.  We then switched to a different protocol for our third transfer, and I got a positive pregnancy test.  We soon discovered that the pregnancy was ectopic, and everything came crashing down amidst bleeding and intense pain.

At that point we had used all the embryos that were created from the egg donor cycle.  However, we were fortunate that the same egg donor was interested in donating again. So about 4 months later, after we were cleared to do another embryo transfer and we had worked up the strength to try again, we went ahead and did another transfer.

This time I wanted to try everything I could not to have another ectopic pregnancy. The chances for an ectopic pregnancy with IVF are about 1-3%; once you’ve had one ectopic pregnancy though, the chances go up to about 10%.  I sought the advice of an acupuncturist I had been seeing on and off throughout my fertility journey. She gave me some herbs to take in the weeks leading up to the cycle, put me on a strict anti-inflammatory diet and recommended weekly acupuncture visits.

At our 6 and ½ week ultrasound, we said goodbye to our special reproductive endocrinologist that we had been seeing for nearly 3 years.  He looked at us and said “Well, you’ve had a road.” And we did have a road. But unfortunately our journey was not destined to end there.  The road took a couple more twists and turns.

At about 13 weeks, at our first anatomy scan, we discovered the baby was not developing appropriately.  We were shocked. It felt like we had been struck by lightning. Even after all that we had been through, we didn’t suspect that something else could go wrong.  But it could and it did.

The complication that arose was congenital and could not be explained – something that “just happens” sometimes during a pregnancy.

We made the difficult decision to terminate the pregnancy.

Somehow though, we were not ready to give up and we decided to keep going.  We explored the possibility of surrogacy, but were encouraged by our doctors to try again. We were assured that what happened in the pregnancy was an anomaly and unlikely to happen again.

After enduring a few more trials, including a hysteroscopy, two endometrial biopsies and about 9 weeks of antibiotics, as well as taking some time to heal emotionally as best we could, we were ready to do another transfer.

I’m not sure exactly what motivated us to keep going. I had always envisioned having more than one child and we wanted a sibling for our son. In addition, as part of a modern orthodox community I felt a little out of place with one child. Nobody asks how your child is doing, they ask about your children, innocently assuming that you have more than one child.

So it’s difficult to pinpoint exactly why we kept going, but somehow I knew in my gut that we weren’t ready to stop.  One of the ideas that resonated with me was the concept that having another child is bringing God’s image into the world, since we are all created in God’s image.  This also made me feel that everything we were doing to have another child had a higher purpose.

Ultimately we did another transfer, and confirmed another positive pregnancy.  This time we were more apprehensive. Our eyes had been opened to all kinds of possibilities of what could go wrong.

The pregnancy brought about a wide range of emotions – joy, anxiety, gratitude, hope, fear.  At times, I felt at ease. Other times I crashed as I was absorbing all the years of everything we had been through to get to this place.

Even though we spent so much time and energy in an effort to get pregnant, now that it seemed that it was really happening, I had some anxiety about how we were going to adjust our lifestyle as we had gotten quite used to being a family of 3. Did we do the right thing? Did we make the right decision to pursue a second child?

Everyone who learned that we were pregnant was thrilled for us – but I felt that while I appreciated their joy and well-wishes, they didn’t know our whole story.

However, despite the intense mix of emotions that I carried with me during the pregnancy, I felt so blessed to be able to be pregnant.  I loved feeling the baby move inside of me and with the exception of a few unpleasant symptoms, I really enjoyed being pregnant.

THE BIRTH AND BEYOND

Since it took a few tries for the donor egg embryo transfer to take, we had a lot of time to adjust to the idea of donor egg.

However, during my pregnancy I still wondered whether and how I would feel differently once the baby arrived and was no longer growing inside of me. How would I feel about the genetic differences? How would others’ reactions have an impact on me?

Now that our baby has arrived, although I’m aware that he doesn’t share my genes, all I see is a miracle – a baby that ultimately came from God and was created in God’s image.  When I look at him, I see my husband, a little brother, our long awaited for baby, and our son.  I’m grateful for the egg donor, who was described to us as having a kind soul, and we hope she passed this special trait along to our son.

At times I’m on a high of being a new mom – that after everything we went through we were able to have another child.

However, if I’m being completely honest I also still occasionally long for the family I had planned for – three children, close in age, a girl with curly hair like mine.  I guess that although in some ways we’ve moved on by having another child, our experiences with infertility will always be apart of us.

I’m also aware of the possible challenges in the future when our child questions his past and the egg donor who helped create him.

But for now, I look forward to getting to know our son and to watching him go through the fun stages of baby and toddlerhood. Having already weathered a great many storms, I feel that we are prepared to handle whatever challenges come our way in the future with strength, thoughtfulness, and resilience.

BE AN ACTIVE SUPPORTER!

Stay connected to empower yourself with the knowledge to support yourself, family or friends facing infertility.

How can we support you?
support@yeshtikva.org

We are committed to financial accountability and transparency. Yesh Tikva has received silver level status at GuideStar.